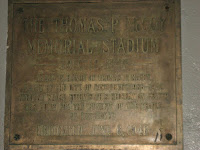 As you enter the clubhouse, a large plaque greets you. McCoy Stadium in Pawtucket, RI, was built in 1942. 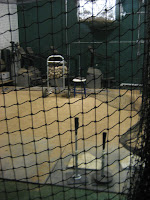 Fans were shuttled into the batting cages, where some 500 of us waited for the players to arrive. 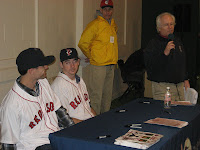 Pawtucket Red Sox staff introduced us to Justin Henry and Allen Webster, and also took questions from the fans. 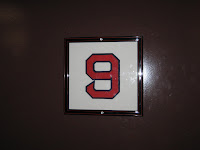 The door into the batting cages had a VERY special number greeting you as you walked in. Ted Williams! 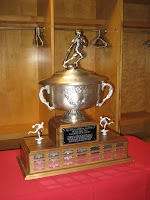 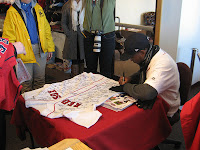 Jackie Bradley signs a Red Sox jersey for a fan. His signature was the 100th autograph on that jersey. I tried counting, but I lost track. 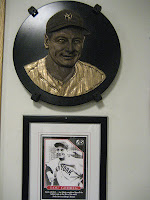 A Lou Gehrig plaque is hanging in the hall way between clubhouses to commemorate Lou's life and to also honor the Pawtucket Red Sox for their help in trying to strike out ALS. 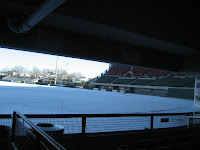 Everyone was glad to be indoors, as the baseball field at McCoy lay with a dusting of cold New England snow. 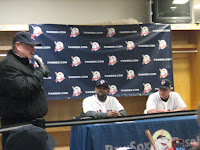 Inside, special guest and RI native Jeremy Kapstein, who is a Senior Advisor for the Boston Red Sox, welcomed Jackie Bradley Jr to Pawtucket. Kapstein called Bradley a wonderful human being and mentioned that Red Sox Nation was lucky to have a man of his character. I concur. 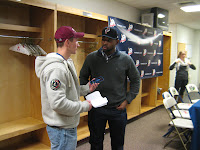 I was fortunate to ask Jackie Bradley some questions of my own before the event wrapped up. Notice my excellent reporting tools: the recorder and the questions a crumpled piece of paper with scribbles on it. Professional! 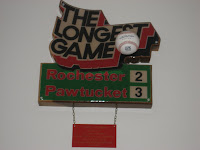 Pawtucket is the site of the longest Profesional Baseball game ever. In 1981, Rochester and Pawtucket played for 33 innings, which lasted over 8 hours. Yawn! 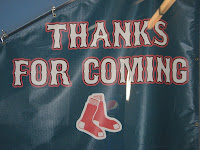 As you leave McCoy, a friendly sign lets you know you are always welcome back. This was my first trip to Pawtucket, I will most definitely be back! See you this Summer!