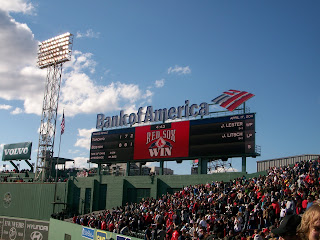 The Red Sox have been bad with runners in scoring position over the last 10 games. Actually, they've been downright AWFUL. That's in all caps because they went 3 - 36 during the Blue Jays series, according to CSNNE. That's so bad that it deserves to be highlighted. If we're ever going to get out of the slump, that has to be the first thing to change. Sure, we have definitely had some bad pitching days during this strech (see: yesterday and the 15 - 8 pounding by the Twins). We've also had some really good pitching games (see: Lester and Bucholz vs the Jays), but the one thing that has been consistent was the inability to drive in runners in scoring position. Still, hard work will pay off in the end, and we just have to keep our heads held high and keep a positive attitude.

John Farrell says in the CSNNE article that there is some frustration because balls are going right at the other team. That is understandable, but you can't let that rule your thoughts.

My message to the team (if they happen to see this - highly unlikely, though) would be this: Frustration gets you nowhere. Actually, frustration just takes you back about 10 steps. So don't let frustration get the better of you, unless you want a repeat of last season, and I doubt anyone on the team wants that. And ignore any outside distractions, because that just creates a negative vibe in the clubhouse and that won't help.

If anything's going to change (it can, and it will), it starts with driving people home when they get into scoring positioning. That has to get better for us to get out of this slump. That's the big thing, because we've had some good pitching days, but that isn't going to mean anything if we can't score runs.