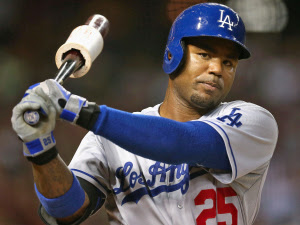 Carl Crawford, one of the players the Red Sox traded in the blockbuster deal to the Dodgers last summer, took a subtle swipe at his old team Thursday.

As the Sox and Dodgers prepared to kick off a three-game series Friday, Crawford was asked by the LA Times about the difference between Los Angeles and Boston,

"You just walk in the [LA] clubhouse and you got a positive feel. Immediately. [Boston] was just a bad experience. I definitely felt like I had a chance to get a fresh start. With a team, new atmosphere, new environment, new everything. I want to win all three games. Bad."

Sunday will mark the one year anniversary of the most expensive trade in baseball history. In addition to Crawford, the Dodgers received former All-Stars Adrian Gonzalez and Josh Beckett along with utility man Nick Punto. The Dodgers also agreed to take on more than a quarter-billion dollars in salary.

Crawford is hitting .288 with 11 stolen bases, five home runs and is owed over $80 million in the next four more years.

With both teams in the playoff hunt, don't expect a sentimental reunion. However, Crawford should feel lucky he doesn't have to receive a "love letter" from Ryan Dempster.