Both Red Sox and Cardinals are "Throwing" games away 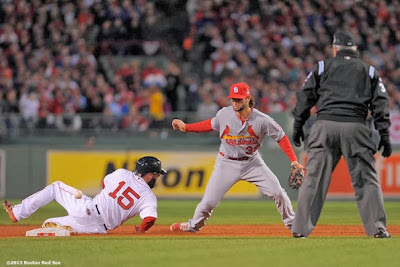 After 2 games at Fenway Park the World Series shifts to St. Louis with the series tied 1-1. While many expected for the story of the series to be the starting pitching at this point it is instead about the errors that have been made by each team, which lead to their downfall in each game. Both teams could make cases that they should be up 2-0 in the series if they did not make the mistakes that they have, but that not being the case, they will have to settle with the series knotted at 1. Lets look at the major errors that have already occurred in games 1 and 2.
Game 1:
The errors started early for St. Louis, in the first inning the Red Sox were threatening early with runners on first and second base with Ortiz at the plate. Ortiz hit a ground ball into the shift to the Carpenter, who made a wide throw to Kozma who missed catching the ball, deflecting off his webbing. The umpire called Pedroia out at second but eventually overturned the call. The next batter, Mike Napoli, cleared the bases with a double and sparked the Red Sox offense. If Carpenter and Kozma make that play it is a double play and the Cardinals end the first inning allowing no runs.
The errors did not end in the first inning for the Cardinals though, leading off the second inning, Stephen Drew, hit a pop up that somehow landed right between Wainwright and Molina for an infield single. Kozma then made another error 2 batters later, not being able to field a ball and allowing Shane Victorino to get on base, and advance runners to second and third. There were then 2 consecutive sacrifice flies bring the Red Sox lead up to 5-0.
In the 7th inning Freese made a throwing error, trying to throw Dustin Pedroia out on a ball hit in the infield. David Ortiz then stepped to the plate and hit a 2 run home run bringing the Red Sox lead to 7-0. In the 8th inning Daniel Nava lead off with a double, then advanced to third base on a wild pitch. Xander Bogaerts then hit a sacrifice fly scoring Nava and increasing the lead to 8-0. Game 1 was filled with errors by the Cardinals, if they had not made as many errors the score would have been much closer and the outcome of the game could have been very different.
Game 2
Game 2 was a highly contested game, with many mental lapses by both teams but none bigger than the one by Craig Breslow in the 7th inning. The first mental error was by Jacoby Ellsbury in the 4th inning. Holliday hit a ball into the triangle out in centerfield and Ellsbury misplayed the ball, allowing for it to ricochet off the wall at a weird angle and advance to third when he should have only had a double. This play was not scored an error but was a mental lapse by Ellsbury. Holliday came around to score later in the inning on a sacrifice fly. 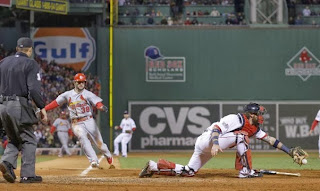 In the 7th inning Lackey was relieved by Craig Breslow, a mistake in my mind, I would have gone to Tazawa. With runners on first and second they attempted a double steal, Saltalamachia bobbled the ball on the transfer between glove and hand and if he had not done this would have thrown out Kozma stealing third easily. Then after loading the bases Breslow gives up a sacrifice fly, where a good throw would have got the runner out at the plate, ending the inning, but instead was wide up the first base line. Breslow backing up the catcher (the only good thing he did on the play) tried to throw out the runner advancing to third and fires high and wide, with the ball ending up in the first few rows of seats, allowing the runner to score and moving another runner up to third base. The next at bat Beltran singles scoring the run. At this point the Sox have given up 3 runs that should not have scored, and are losing 4-2.
Both teams have committed huge, game altering errors in the first 2 games. If anything has been learned from the first 2 games by either of these teams it should be to not give the other team extra outs, because typically it comes back to hurt you. As the teams travel to St. Louis for games 3,4, and 5 the Sox must realize that they cannot commit errors, especially late in games. Whenever they commit an error it gives St. Louis another chance to get back into the game, to take back a lead that the Sox fought so hard to attain. What do you think was the biggest miscue of games 1 and 2 for either the Sox or Cardinals? Will each game of the series be defined by a big error that leads to runs? Leave your answers in the comments section or tweet at me at Ryanmacleod15