Feature - "Mom, can I have some pine tar? All the other pitchers are using it."

Shortly after Jon Lester's dominant outing in the Red Sox 8-1 win over the Cardinals in Game 1 of the 2013 World Series, the allegations started flying - LESTER WAS UP TO SOME FUNNY BUSINESS WITH HIS GLOVE! 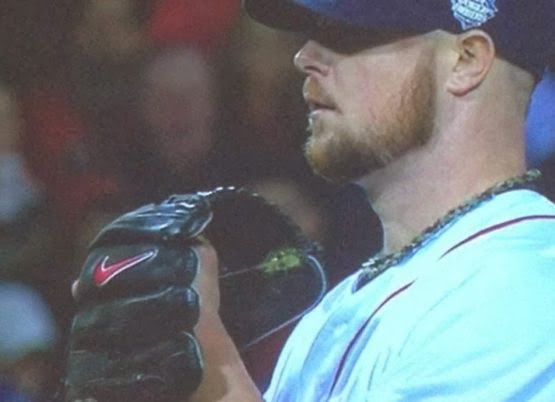 Whether prompted by the parent club or not, Cardinals minor leaguer Tyler Melling tweeted out a photo of Lester (the tweet has long since been deleted by Melling) that showed what appeared to be some kind of green substance on the thumb of Lester's glove.

In response to the predicted reaction, Boston manager John Farrell said, “If you know Jon Lester, he sweats like a pig and he needs resin. And you know what? He keeps it in his glove. Other guys will keep it on their arm. Other guys will keep it on their pant leg. So that’s my response to the allegations. The one thing that seemed very odd is that it shows up in a lime green color. I don’t know how that can happen.”

In looking at various video clips and gifs since, it's obvious that Lester was indeed going to his glove for something. For his part, Lester acknowledged that the green substance looked "like a giant booger" while maintaining that all he's ever used is resin.

The fact is, use of a substance such as pine tar or resin by pitchers is commonplace, especially in colder weather. And while technically illegal, it's also well-known throughout the game leading some to believe that there is almost tacit approval of the practice. One former MLB pitcher told me, "I usually used pine tar. Using something in the cold weather really helps with the grip."

I also spoke with a former MLB catcher who added, "When it's cold out, 99% of pitchers use something for a grip. Always have...always will."

One former minor league pitcher learned about using some kind of sticky substance from a former MLB pitcher. "I used pine tar most of the time (I was pitching), hot or cold weather. Better grip creates better rotation, thus better movement." And another former minor league pitcher added that he would use pine tar, leaving it mostly on the end of the lace off the pinkie finger of his glove. "It gave me a better grip in the cold, and (when it wasn't cold) I felt I got a better bite on my sinker."

Pitchers aren't the only ones with a little extra in their gloves, either. A former minor league infielder once told me he used pine tar in his glove to help the ball stay in, as well as to help stiffen the glove (he liked to have a nice wide pocket). And former Red Sox utility player Lou Merloni, now a co-host on WEEI's Mut & Merloni midday show, said on the air this past week that he used pine tar on occasion for a better grip when throwing the ball; he also said that he knew of some catchers who had a little something extra in their mitts for the same reason.

As for how hitters feel about it, most of the former professional hitters I've spoken with said they accept it as a part of the game. Their sentiments were echoed by Farrell who added this in his post-game comments - “I know talking to our own hitters, they want to be sure that a pitcher has got a complete grip of the baseball. Last night and in this series, there are pitchers on both sides that are going to be mid to upper 90s‑type velocity. If a hitter in the batter box has a little more comfort knowing the pitcher has a good grip, then maybe they’re a little more at ease as well.”