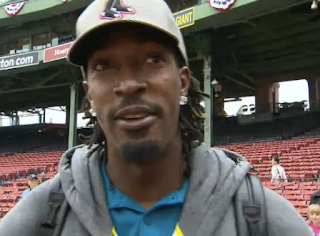 While the early season criticism of Gerald Wallace has been that he needs to create more opportunities for himself, be more creative on offense, mentor the team, and essentially drive the bus until Jeff Green does or Rondo comes back to do it himself, the one thing you can't knock Wallace for is his desire. He wants to play basketball, and more importantly, he wants to play basketball in Boston.

Wallace's love of both the Boston Red Sox and New England Patriots is well documented, but today a late in the day piece of news was released that, in my opinion, solidified Wallace as the kind of player that I'm glad Boston has on it's roster.

“I didn’t get to celebrate,” he explained. “I was tired (Wednesday). I haven’t played 40 minutes in a while, so I took a little adjustment. I went to sleep. I’m going to celebrate (after Thursday’s practice) though. I’m going to go home and have a glass of wine in my new Red Sox World Series cup.”

Playing for 40 minutes? Getting the proper rest? Not partying or rioting? Waiting until after practice to celebrate with a special cup for the occasion? That is GROWN UP activity. That is showing maturity. That is putting the success of the team before the needs of oneself.

Of course I want all of the pieces to fall in the place and for Wallace to emerge as a solid contributor on this year's Celtics team, but the fact that energy, heart, determination, and a desire to play for Boston are NOT the issues? The rest is just basketball and up to Coach Stevens to deal with.

This is written by Padraic O'Connor and cross-posted with CelticsLife.com. For more coverage of the brand new Celtics follow @CelticsLife on twitter.