Is David Ross an MVP Candidate? 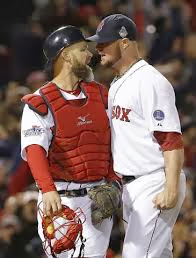 While there have been loud contributers to the World Series MVP case, David Ross has quietly been working his way into the discussion. While David Ortiz, and Jon Lester have been in the headlines, Ross has been out of the spotlight but has been shining just as bright. Lets compare the stars of the series so far;
David Ortiz
This guy has been a monster, and I think he has the perfect quote "I was born to do this". He is 11-15 this World Series with 2 Home Runs and 6 RBI's. Make that 3 Home Runs and 9 RBI's if Beltran doesn't rob him of a grand slam in Game 1. Ortiz is locked in and deserves the MVP.
Jon Lester
Lester has been locked in with both of his starts in the World Series. In his 2 starts he has pitched 15 1/3 innings allowing only 1 run to a very good Cardinals lineup. He has gone pitch for pitch with Adam Wainwright and has beaten him both times he has faced him.
David Ross
Scoff if you want, David Ross is a MVP candidate. He has started 3 games behind the plate, the 3 games that the Red Sox have won. He worked amazingly with Lester in both Game 1 and Game 5 and could get almost the exact same credit that Lester does for those outings. Ross was also behind the plate for Game 4, with Buchholz pitching. He carefully lead Buchholz for 4 innings and then the bullpen the rest of the way. When Ross is behind the plate St. Louis batters have only 17 hits in 3 games. In the 2 games he was not behind the plate the Cardinals combined for 19 hits against Red Sox pitching. At the plate Ross has been hitting .250 (3-12) this series in the 3 games that he has played, but he delivered the game winning run scoring double in the 7th inning.

While Ross is not getting the attention of many he is quietly compiling quite the statistics for a serious case of being named the MVP of the series. Do you think that Ross even has a case of being named MVP? Will he even be considered for the award if they win the next game? Leave your answers in the comments or let me know on twitter.