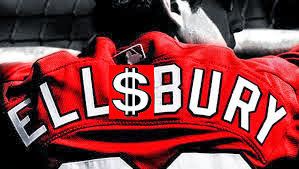 The Red Sox worst-to-first season is not over yet as they prepare for the ALCS and a possible third World Series title in 10 years. However, 25 other teams find themselves right where the Sox were last year - watching the playoffs from the couch with a bucket of chicken and a couple cold ones.

One of those teams is the Seattle Mariners and they are watching very closely.

According to FOX Sports Ken Rosenthal, the Mariners have set their sights on one Sox player in particular - Jacoby Ellsbury. Rosenthall appeared on WEEI Boston Thursday and said that Seattle is prepared to sign Ellsbury to a six or seven year contract at $21 million per season, making it a $126 million or $147 million contract, depending on the amount of years.

This may be too rich for the Red Sox blood.

The Red Sox have said multiple times that they would like Ellsbury to return to Boston. The Sox also have the wallets deep enough to handle a $20 million a year contract. However, it is the years, not the dollars, that may get in the way of this one.

$21 million a year for seven years is a pricey problem for an injury prone, speed dependent player that would be approaching his mid-thirties by the end of the deal.

As John Tomase of the Boston Herald pointed out Thursday, only six players have stolen 50 bases after age 33. Three of those, Lou Brock, Rickey Henderson and Honus Wagner, are in the Hall of Fame. Jacoby Ellsbury a Hall of Famer? How valuable is Ellsbury if, in two or three years, he goes from being a 50 steal threat to a 20-30 steal one?

The Boston brain trust is unlikely to take the chance. The Red Sox will not go down the 7-year, $142 million Carl Crawford road again anytime soon. The Sox can't count on Magic Johnson to bail them out of every bad deal.

There is no denying Ellsbury is having a great playoff series. He was a difference maker and the MVP of the ALDS as he hit .500 with seven runs scored and four critical steals. Every bloop hit, first-to-third sprint on a passed ball and five foot celebratory jump just increases his value exponentially.

Somewhere, sitting on his sports agent Death Star throne, Scott Boras says, "Everything that has transpired has done so according to my design." Then he adds another year and a few more zero's to Ellsbury's contract.

Enjoy it while you can Red Sox Lifer's. Jacoby Ellsbury may just lead this team to another Duck Boat ride down Causeway and then trade in his red socks for the shadow of the Space Needle.