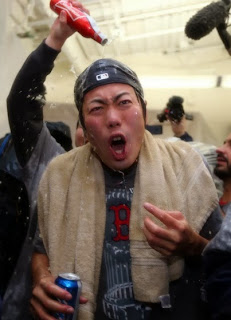 Last night the Boston Red Sox won the World Series for the first time at home in 95 years. While Fenway was very isolated due to security precautions the city of Boston still went crazy. I was fortunate enough to go downtown and walk around Fenway before the game, then go to a bar to watch the game.
The pre-game atmosphere around Fenway was electric. As soon as you got off of the MBTA at Kenmore Square there were people everywhere. Scalpers were asking outrageous prices for tickets, but people were still stopping to talk to them. Programs were being sold on every street corner, and to top it off the bullpen cop was taking pictures with people outside of B Gate. There was an energy in the city that was so electric, it could be felt all around Fenway, with people expecting a positive outcome of the game.
To get into the bars last night was insane. The line for the Cask n' Flagon was halfway over the Mass Pike, and many bars had lines so long that if you were to wait in line you would have missed majority of the game. I ended up at Thorton's, a smaller bar in the Fenway area, but not right by the park.
Inside the bar once the game started it was overly energetic. The only quiet times were when the National Anthem and God Bless America were sung. The bar hung on every pitch just like the fans at the ballpark did. Every jam that Lackey got out of brought cheers that became louder and louder. Once Victorino hit the bases clearing double off of the monster the roof almost blew off of the bar with the roars that erupted from everyone's lungs. There was no sitting down in the bar, everyone was standing, yelling and cheering on their beloved Red Sox. After 7 innings the countdown began. It started with 6 outs but worked its way down to 1. Then came the counting of strikes. Once Uehara struck out Carpenter to end the game all chaos broke loose, many fans had crowded around the bar outside watching through the window. Hugs were exchanged with everyone in the bar and many tears were shed.
Once in the streets it was just excitement, with the feeling not quite setting in that the Red Sox were World Champions. It still doesn't quite feel like what we witnessed last night truly happened. Where were you when the Sox won the World Series last night? Leave your answer in the comments below or tell me on twitter.