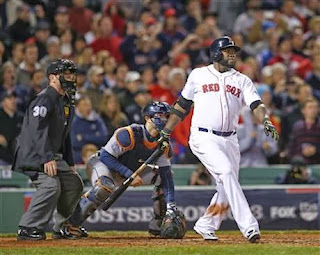 The struggling Boston bats came alive with one swing Sunday night as David Ortiz cemented himself firmly in Red Sox lore with a dramatic grand slam in the bottom of the eighth inning off Tigers closer Joaquin Benoit. The Big Papi blast tied the game at 5-5.

Boston would win it in the bottom of the ninth when catcher Jarrod Saltalacchia hit a walk-off single to score Jonny Gomes with the winning run and tie up the ALCS at 1-1.

The never-say-die Red Sox generated plenty of excitement in the twitterverse after this one.

This team never gives up and we showed that tonight ... big win for us but still a long way to go we are playing a great team over there
— David Ortiz (@davidortiz) October 14, 2013

What a game!!! Definition of team effort 👏👏👏 @davidortiz = Heroics and #Salty with the finishing 👊 #BostonStrong

Its never over with this team! Your confidence doesn't waiver when you have guys like @15Lasershow, @davidortiz, Jonny amd Salty! #NVRQT
— Jon Lester (@JLester31) October 14, 2013

Game 3 is Tuesday in Detroit as John Lackey faces off against Justin Verlander.