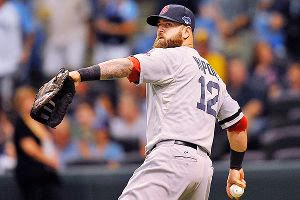 A Red Sox "fan" was caught red-handed Sunday trying to make off with Mike Napoli's glove. He would have got away with it too were it not for those meddling Fenway security guards.

According to The Globe:

At around 2:30 a.m. Sunday, officers responded to Yawkey Way for a report of larceny and found Robbins inside the Sox clubhouse. When asked what he was doing, Robbins began to exit the clubhouse, dropping Napoli’s beloved glove along the way.

Robbins was stopped by fast-thinking Fenway security staff in a parking lot reserved for players. He was carrying Red Sox and Major League Baseball press box passes, which lead them to believe Robbins had also been in the press box. It was unclear how he had obtained the credentials.

Robbins was arraigned Monday on charges of "attempting to commit a crime and trespassing." He was released on $300 bail and ordered to "stay away from Fenway Park."

“[The glove] was valued at $450 for purposes of the case, but a perfectly worn mitt is priceless We’re glad Mike got it back and won’t have to worry about it [Wednesday] night.”

No word on whether Robbins is a Red Sox fan or if the Cardinals had found a way to infiltrate the Fens.