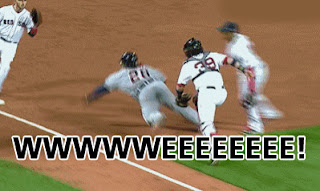 3. Excuse Me, I'll Take That - Nobody at Fenway enjoys watching the visiting team produce a base hit let alone a home run, so it came as no surprise when fans demanded that a home run ball be thrown back onto the field - in protest for sitting through such a event. However, things took a turn for the funny when a man, sitting next to the woman who owned the cursed ball, pried open her hand and chucked the ball back onto the field. Things got even funnier when that same man
was escorted out of Fenway for doing so...

2. Miggy Be Trippin, Like Whoa - Poor Miggy. His series against the Red Sox left much to be desired, but it was his running (or just plain walking, actually) on the bags that left the best hitter in the game dusting off his pants and ego. Yet, we really shouldn't make fun of Cabrera because, for some guys, doing two things at once is a frickin' death sentence. Right Miggy?

Everyone take note of Fielders reaction to Miggy taking a a little tumble on the third base bag during the ALDS. Sweet irony has never looked so good as we venture to see who's number one on our list of 'Funniest 2013 MLB Postseason Moments.'

1. Superman, Flying Squirrels and Belly-flops - Someone cue R. Kelly's "I Believe I Can Fly" please. On second thought let's hold off on that request. However, does anyone want to take a guess as to what Prince Fielder was thinking as he tried to take flight back to third base like he was on the runway at Logan airport? I'm assuming he either thought he was Superman exercising his ability to leap building in a single bound, or he found out his spirit animal was a flying squirrel and acted according. Either way it made for one heck of a funny playoff moment. Thanks Prince, we needed that.