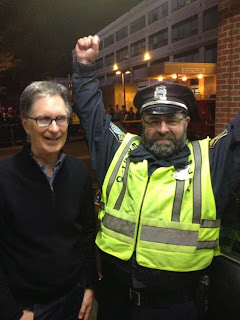 I thought you, yes YOU, might enjoy getting into the Halloween spirit so I provided a few examples from the Twittersphere and Vination of the hottest selling costume this season, The Bullpen Cop!

Sure, it's a little weird wearing an outfit that has a man upside down - feet sticking in the air - while you're right-side up, but hey, tis the season right?

Speaking of season, if you decided that replicating this instant iconic moment was a much do then send us your picture of this year's greatest Halloween hit. Seriously, do it because these are frickin' hilarious and we could always use a good laugh here at RedSoxLife.

Without further ado, here are a few tasty nuggets of Halloween goodness. Enjoy!