We’ve all heard the story of how the Red Sox went from worst to first. But who gets the credit? Is it the players, the coaches, or the management? Well, it’s a little bit of everyone, and here’s the breakdown: 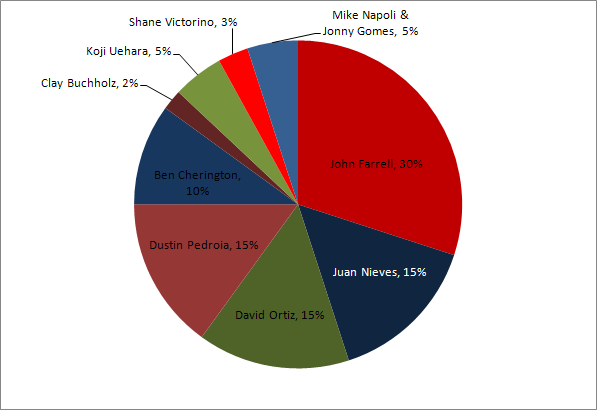 John Farrell:
Farrell definitely gets most of the credit here. After such a horrible season with The Manager Who Must Not Be Named, it’s amazing that anyone was able to get control over the Red Sox. But Farrell was able to get the team to do a complete 180. All of the players clearly have a lot of respect for the guy, and they want him to stick around, so denying him a large chunk of the credit just isn’t an option.

Juan Nieves:
Pitching was one of the weakest links of the 2012 Red Sox. Having Nieves around totally changed that. While all of our former aces posted their worst numbers in 2012, they were (for the most part) back in their true form this season. Even John Lackey, who was a large part of the great beer and chicken debacle and was criticized for his bad attitude, got himself on track. Nieves’ coaching just can’t be overlooked.

David Ortiz and Dustin Pedroia:
Combined, these two get as much credit as Farrell. The two veterans acted as the unofficial team captains. They produced, and they helped turn the attitude of the team around. Without their experience, the turnaround that the team made probably wouldn’t have been so drastic.

Ben Cherington:
You have to give Cherington a decent amount of credit as well. Remember, he’s the one helping make hiring and signing decisions, so without him, there may have been no Farrell, Nieves, or a lot of the other guys who were added to bring the team back to life.

Clay Buchholz:
I gave Buchholz a little bit of credit because his performance before his injury really put a winning attitude in the Sox. I mean, he couldn’t lose. And seeing as how he was one of the ones who struggled last season, it really showed everyone that this team was different and that they meant business.

Koji Uehara:
Uehara came in while the Sox were struggling. Ineffective closers kept getting hurt, but Uehara stepped up and was absolutely unbeatable. He gave the team a sense of security that no one else could at the time. When things were starting to slump, Uehara helped put the spirit back in the team.

Shane Victorino:
Victorino was an offseason pickup who showed that he belonged just as much as anyone else. I only gave him a little bit of credit because of the time he spent on the DL, but the fact that he played through injury and still produced was unbelievably admirable compared to the laziness fans saw last season.

Mike Napoli & Jonny Gomes:
I made these two a package deal because it’s not about the way they played, but rather the attitudes they brought into the clubhouse. They were fast friends with all the other players, and brought their experience from other ball clubs in to show that this was a new chapter in Red Sox history.