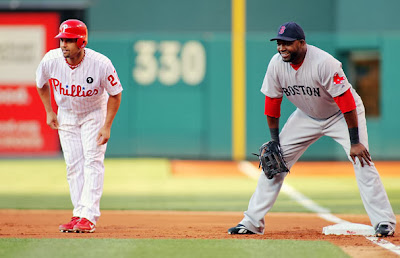 In 2004 and 2007 the Red Sox faced a dilemma in the World Series, they had to take their every day first baseman and sit him on the bench when they travelled to the National League ballparks in order to keep David Ortiz's bat in the lineup. This year seems to be no different. Mike Napoli has been a consistent bat in the Red Sox lineup all season and has provided key hits this postseason, most importantly the only run of Game 3 of the ALCS.
Is taking Mike Napoli out of the lineup and off of the field worth it for keeping Ortiz's bat in the lineup? Ortiz has also had key hits this postseason, most notably the Grand Slam in Game 2 of the ALCS. Ortiz has played 6 games at First Base all season for the Sox, playing 39 innings. Ortiz had 37 total chances, got 36 put outs, 1 assist and 0 errors. So far this season Ortiz has proven that he can play first base.
I think that Ortiz should play first base for the first 7 innings then come out of the game for defensive purposes. Napoli is a better defensive first baseman than Ortiz and is not considered a downgrade at the plate compared to Ortiz. Currently the rumor is that Ortiz will start at First Base in Games 3,4 and an if needed Game 5. I think this is the correct decision, and if anything goes extremely wrong than manager John Farrell can change his mind.
What do you think about who should get the majority of playing time at First Base when the team travels to St. Louis? Leave an answer in the comments below or interact on twitter.