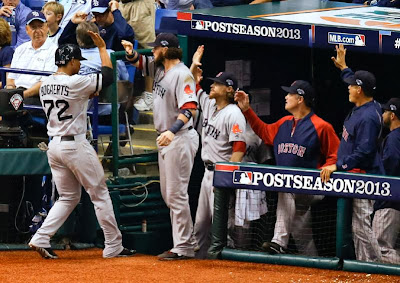 Every time Xander Bogaerts plays in the postseason he continues to make John Farrell look like a genius for including Bogaerts in the postseason roster. Bogaerts contributed most in game 4 of the ALDS against the Tampa Bay Rays scoring 2 runs while drawing 2 walks at the plate. This season Farrell has been extremely set on his starting lineup, especially the infield. So far this postseason though Farrell has changed it up quite a bit. We have seen changes behind the plate, at first base and in left field. This brings up the question will Xander get a start at either third base or at shortstop?

Stephen Drew has been struggling at the plate this entire postseason hitting a minimal .095, 2-21 in 6 games. What Drew has been lacking at the plate, he has been making up for in the field by playing a very solid defensive shortstop. The likely hood is that Xander does not start at shortstop this series but instead will come in as a pinch runner/offensive replacement for Drew if he continues to struggle at the plate.

Will Middlebrooks has also been struggling at the plate during the Tigers series, going 1-5 but scored a run in Game 2 versus the Tigers. Middlebrooks has been taken out of the game a few times already this postseason and has been replaced by Bogaerts. If Bogaerts gets a start this series it will likely be at third.

Im not quite so sure that Bogaerts starting would be an upgrade at either shortstop or third base. Middlebrooks provides more power at the plate and Drew provides more stability in the middle of the infield. I dont think Bogaerts will get a start this series unless something drastic happens to either Drew or Middlebrooks. Do you agree with what I think about Bogaerts getting a start? Leave an answer below in the comments section or on twitter @Ryanmacleoc92.