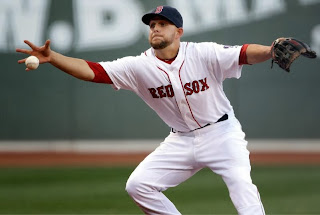 Brandon Snyder went to twitter to announce that he signed a 1 year deal with the Boston Red Sox. Two weeks ago Snyder was outrighted off the Red Sox 40 man roster and he elected to try free agency. The deal specifics have not yet been announced but it is expected that it is a Minor League Contract. Snyder first signed with the Red Sox after spring training this year. He was signed as a first baseman and played first, third and one game in left field. Last season with the Red Sox he played in 27 games hitting .180 with 2 home runs and 7 RBI's.

What do you think about re-signing Snyder? He is a good off the bench player and will likely spend time in the minor leagues. While the specifics of the contract not yet released what do you think a reasonable price for Snyder to stay in Boston? Leave your answer in the comments section or let me know on twitter.