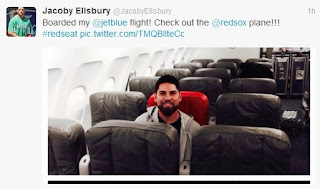 While many fans were rejoicing today at the Red Sox Rolling Rally today, it may be the last time we see Jacoby Ellsbury in a Red Sox uniform. Ellsbury is likely the 2nd most popular free agent this offseason and the most likely to leave the club that he played for last season. Not more than 12 hours after the Rolling Rally started on Saturday morning, Ellsbury posted a picture of him on a flight leaving boston. While this tweet showed Ellsbury in the "red seat" on the Red Sox Jet Blue airlines it is still not a good sign.
Most fans would expect players to spend time with their families and teammates today after an exciting parade but not Ellsbury, the popular free agent. It has been rumored that his agent, Scott Boras, will be looking for a big payday for Ellsbury. Mike Napoli was rumored to be downtown celebrating and interacting with fans. Tony Lee tweeted this shortly after the Ellsbury tweet was posted:

Is this an indication of Ellsbury's plans for next season? Would he already be telling the Boston Red Sox that he is not re-signing with the team after he won a second World Series title with them? What are youre thoughts about the 2 tweets, are you buying into it as Ellsbury leaving or the media starting controversy? Leave you're answers in the comments below or let me know on twitter.