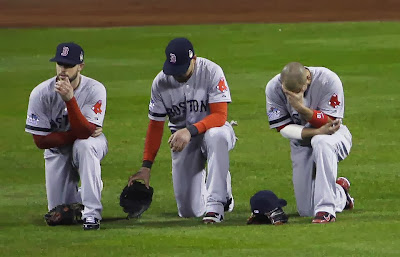 Jacoby Ellsbury seems to have channeled his inner Patrice Bergeron and played this postseason with an injured left hand. In the picture shown to the left if you look closely at Ellsbury's left hand, the one not holding his glove, it does not look discolored but does look swollen. With Ellsbury being a free agent this offseason you can imagine that the result of his MRI will be kept under wraps for hoping that he will not suffer a pay cut from a potential signing of the center fielder. Ellsbury had committed a few uncommon errors in the World Series, and now one can wonder how much his injured hand affected his performance. None the less, he was able to play and helped the Red Sox win the championship. The Red Sox are expected to make a 1 year qualifying offer to Ellsbury so that if he chooses to sign with another ball club the Red Sox will be compensated with a draft pick.

Do you value his efforts this postseason more now knowing that he was playing with an injured hand? What do you think will happen with Ellsbury this offseason, where will he end up? Can GM Ben Cherington work a miracle and resign Ellsbury? Leave your answer in the comments below or tell me what you think on twitter.