Mike Napoli being pursued by the Seattle Mariners 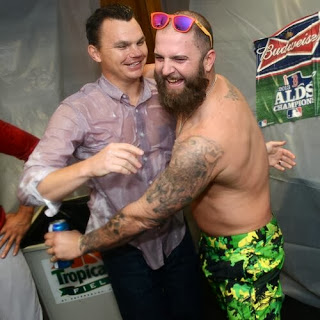 Have you ever had a friend that always seems to buck the system? An individual that - for whatever the reason - does the exact opposite of what common sense would dictate?

If that friend was a MLB team it would proudly wear the name tag, "Hi, my name is the Seattle Mariners."

The Mariners have been linked to Jacoby Ellsbury, and as of Wednesday, Mike Napoli.

Is this a sincere attempt to build a championship team in the Pacific Northwest or a random assortment of offseason hot stove activity - a free agent Chaos Theory if you will.

Help me out Ken!!

Ken Rosenthal from FoxSports.com wrote this enchanting tale of a baseball team eager to fill its roster with the champions of old (and in their case, new).


Ellsbury is the Boston free agent who most frequently is linked with the Mariners, but don’t be surprised if the M's take another run at first baseman Mike Napoli, whom they pursued as a free agent last offseason.

The Mariners consider right-handed power to be their biggest need, and Napoli appeared in 139 games — the second-highest total of his career — after being diagnosed with avascular necrosis in both of his hips last winter.

You're better than that... I think.