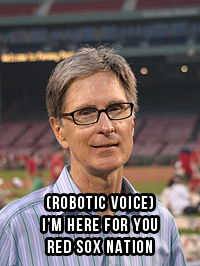 The Red Sox reportedly made a two-year offer to Jarrod Saltalamacchia that averaged less than $10 million a year. However, all sources have indicated that both sides are still far apart in contract negotiations.

Salty is seeking the ever elusive three-year deal, and the Red Sox are acting like they're in no mood for any such talk.

Currently the free agent market is a bit saturated with catchers, and the Sox have been linked to a bunch including Brian McCann, Carlos Ruiz and A.J. Pierzynski. Perhaps there have been some seedy back door dealings that we're all unaware of. Maybe that's why the Red Sox are playing around with Saltalamacchia like he's incapable of moving elsewhere.

My only question is why would a team, who has publicly stated over and over again that they would like to see their incumbent catcher return, continue to play hard-to-get? Remember John, Larry and Tommy Boy what goes around comes around.