Sox want Napoli but does Napoli want the Sox? 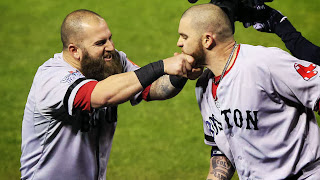 Ryan MacLeod (ryanmacleod15)
Contributing Writer
As expected Mike Napoli rejected the Boston Red Sox qualifying offer and decided to test the free agency waters, but this has not deterred the Red Sox front office from trying to get Napoli to return to Boston for next season. Napoli was a consistent first baseman for the Red Sox this season. He hit .259 in the 139 games he played. He hit 23 home runs and had 92 RBI's. Napoli was originally signed to a 3 year contract last offseason but it was reduced to 1 year after there was worry about his injured hip.
After the World Series ended both the Red Sox and Napoli have expressed interest in having Napoli in a Red Sox uniform for next season. It is expected that Napoli rejected the qualifying offer to try and get more money from the Red Sox after testing the free agent market. Ben Cherington said "We absolutely have an interest in having him back." Cherington also added that he does not expect a deal to be made within the next week with either Napoli or any of the free agents that the Red Sox are targeting.
Does it seem like Napoli is intending to return to the Red Sox and just trying to get more money or does he really want more money from another team? Would Napoli be worth upwards of $15 million per year on a multiple year deal? Leave your answers in the comments below or let me know on twitter.