3 Reasons why not to sign a free agent outfielder 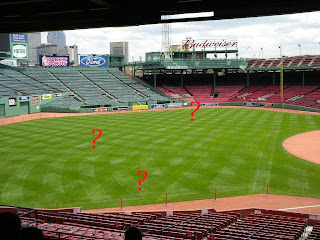 With Jacoby Ellsbury officially no longer being a member of the Boston Red Sox, the front office has a lot of decisions to make, especially in the outfield. Many people are calling for the Red Sox to sign a higher profile free agent outfielder to fill some of the large void that is now exposed without Ellsbury. Here are 3 reasons why the Red Sox should not sign a high profile outfielder this offseason.

1) Shane Victorino
Victorino has played center field for almost all of his career before joining the Boston Red Sox last offseason, yet he has mastered the tricks that playing Right Field at Fenway Park brings. If the Red Sox look to bring in an outfielder they will likely move Victorino to center and have whoever they sign in right. Let Victorino continue to play where he has excelled in Fenway.

2) Jackie Bradley Jr.
For the last 4 years people in the Red Sox organization have been talking up JBJ's abilities while he was in the Red Sox minor league farm system. Last season JBJ battled for a spot on the 25 man starting roster while at spring training and impressed many. He played in 37 games last year for the Red Sox and while he was not overly impressive at the plate he was impressive in the field. e played in 19 games in center field and he held a fielding percentage of 1.00 getting 42 put outs in 42 chances. JBJ has proven that he can play center field for the Red Sox, and his hitting will come along as he plays more and faces major league pitchers.

3) Staying away from major contracts
After seeing what Jacoby Ellsbury signed for in New York (7-years $153 Million) other high profile free agent outfielders will be looking to cash in on a major paycheck as well. For the Free Agents that are still on the market they will likely want upwards of 5-years and $100 million, making them the highest paid Red Sox player. The Red Sox need to stick to their plan of building from within the organization and having players that buy into their system, just like Dustin Pedroia. Pedroia took less money and more years from the Red Sox organization than he could have received from other teams. The Red Sox do not need to go out and overpay for a free agent to fill the Ellsbury void when they can promote from within and not spend excessive amounts of money.

What do yo think should be done with the current free agent market? Do the Red Sox really need to go out and sign a high profile free agent outfielder and potentially overpay? Leave your answers in the comments section below or tweet me.