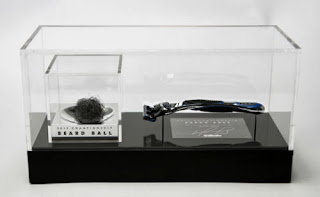 Shortly after the Boston Red Sox won the World Series this past season both David Ortiz and Shane Victorino partnered up with Gillette and the Movember Foundation and shaved off the beards that became a lovable facial feature by much of Red Sox Nation. After the beards were shaved they were auctioned off on ebay and the auctions ended on Saturday. Victorino's ex-facial hair was sold for $3,750.69 after 127 bids were placed, while Ortiz's beard clippings went for a staggering $10,877.77 after 132 bids were placed. The "winners" of these auctions will received the beard ball the razor that was used to shave the face and the signature on a the case that is shown in the picture above.

Would you ever pay for someone else's facial hair? If so how much money would you pay and whose would it have to be? I guess we can congratulate the men or women that decided to purchase both Ortiz's and Victorino's beard hair, but the real winners are the Movember Foundation who raised over $14,000 all thanks to Big Papi and the Flyin' Hawaiian. Comments, leave them below or @ me on twitter.