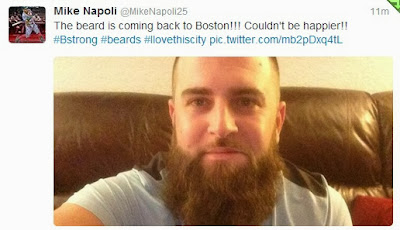 Fear not Red Sox Nation. The most loved beard will return to Boston next season, as Mike Napoli has agreed to a Multi-Year deal with the Boston Red Sox. The deal was first reported by Rob Bradford on Twitter. The deal is for 2 years totaling $32 million. Napoli had at least one bigger offer on the table but chose to stay in Boston. It is not yet known if the bigger deal was more years or more money per year.

Last season Napoli hit .259 with 23 home runs in 139 games with the Red Sox and was a key member of the team both on the field and in the clubhouse during the teams run to the World Series title. Ken Rosenthal is continuing to release information on twitter about the deal and reported that it was a multi-year deal.

Last season Napoli originally signed a 3-year 39 million dollar contract but due to concern about his hip the deal was reduced to 1 years. After this deal Napoli will make 45 million over the 3 years he is a member of the Boston Red Sox.