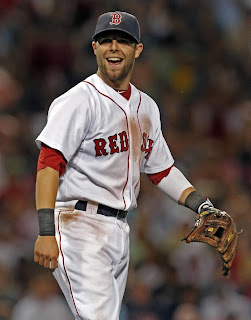 Can you imagine living a life knowing $240 million is coming your way over the next 10 years?

That’s the life Robinson Cano will enjoy for the next decade after his monster deal with the Seattle Mariners. It’s also the life Dustin Pedroia could have had had he tested the waters of free agency – or asked the Red Sox for a lot more money.

Instead, Pedroia “settled” for $110 million with an eight-year extension to remain in Boston, a place he loves and that loves him back. The Laser Show already has four All-Star selections, three Gold Gloves, two World Series rings, an MVP award and Rookie of the Year honors, and a Silver Slugger award – and, given the season, a partridge in a pear tree.

OK, that last part may or may not be true. Our sources can’t confirm either way. Nonetheless, Pedroia is happy to be in Boston and proved that by signing with the team that drafted him in the second round of the 2004 Amateur Draft. He's a breath of fresh air compared to some of the money-seeking players out there, namely Cano.

Pedroia spoke with The Globe’s Nick Cafardo and gave his good graces to Cano:

“Couldn’t be happier for him and for us. We don’t have to face him 19 times a year.”


Some media members and otherwise have mentioned that Pedroia is going to make $130 million less than Cano despite having more accolades. They speculate that Pedroia is being underpaid and undervalued.

Pedroia’s response (not directly to the Cano situation, but being underpaid in general)?


It’s great to have you in Boston, Mr. Pedroia.