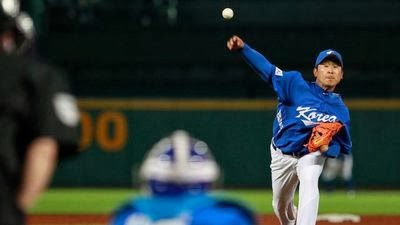 The name is Suk-Min Yoon.

Ever heard of this young man?

Well the Red Sox have been names as a team with interest.

While we know the Twins, Red Sox are 2 teams on Korean RHP Suk-Min Yoon, one exec guesses he's a good fit for the Giants
— Peter Gammons (@pgammo) January 10, 2014


I guess this amounts to free flowing speculation as to where Yoon might be headed. I really don't see the need or the rush to pull over a pitcher, right handed, who has a low 90's fastball and has mostly been a bullpen asset throughout his career.

Maybe the Red Sox can find a way to not spend too much and get him into the minor league system?

At 27 years old, Yoon could be one of the low risk, high reward projects for the Red Sox for the next few years?