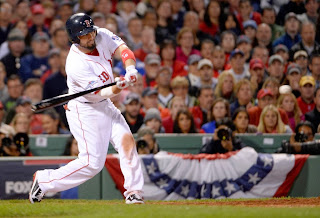 As Spring Training rapidly approaches there are still quite a few questions that are surrounding this seasons Red Sox team. One of the biggest questions is at the top of the lineup, who will be hitting lead off for the team come Opening Day. This offseason the Red Sox lost one of the best lead off men in all of baseball to free agency, and eventually to the New York Yankees, Jacoby Ellsbury. Thankfully the Red Sox have a deep enough lineup to not have to be too stressed about who will hit in the leadoff spot. A likely candidate for the position will be Shane Victorino. Victorino hit in the 2 hole last year behind Ellsbury and had a very successful season. Shane has hit leadoff before in his career and has had success in the past with the pressure of hitting leadoff. Here is my predicted Opening Day batting order for the Red Sox.