4 Things to watch in Spring Training 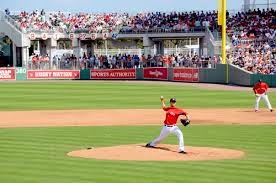 Football season is officially over now and the countdown to Spring Training is really on now (February 13th!). I hope you guys are as excited as I am! There are a lot of question marks surrounding the Red Sox right now, like who is going to be starting in center field, among others, and we'll start to get some answers in Spring Training. Here are 4 of the major story lines to watch in Spring Training.

1. Who Starts in center - Without a doubt, one of the biggest stories going into will be who takes the place of Jacoby Ellsbury. All signs right now point to Jackie Bradley being the starting center fielder, but if Grady Sizemore shows even 50% of what he was before his numerous surgeries, he could platoon it with Bradley or take over the job outright. As of right now, though, the starting job is Bradley's to lose.

3. Who hits 1st? The leadoff guy is a big question mark with Ellsbury gone. Jackie Bradley, Jr. might be primed to take over in center, but I don't think he'll step into that lead off role right away. That may be the Red Sox eventual plan, but not in 2014, I don't think. Shane Victorino and Dustin Pedroia seem like likely candidates to me to hit lead off, but Spring Training will tell.

4.Chemistry - There will be new faces in Spring Training in a couple of weeks - A.J. Pierzynski, Grady Sizemore, Burke Badenhop, and Edward Mujica to name a couple. The question is - how will these guys fit in to the established chemistry? That will be something to watch in Spring Training. For the most part, I don't think it should be a problem, but something to watch nonetheless.