Ortiz squares off against Jeter in Face of MLB poll 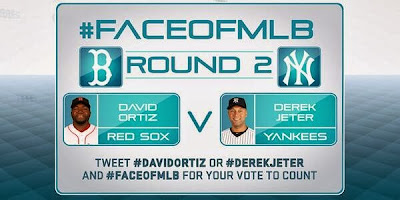 Reining World Series MVP, and fan favorite David Ortiz was given a first round bye in the Face of the MLB competition that is being run on twitter by the official MLB Network's twitter. Due to his first round bye, he was matched up against Derek Jeter in the second round. This is a match-up that should be seen in the finals, instead of the second round, as both players are some of the biggest names in the sport.

Jeter ended up beating Ortiz in a blowout, tallying a total of 58% of the votes compared to Ortiz who got 42% of the fan votes. All of the voting was done on on twitter, with fans tweeting #FaceofMLB and either #DerekJeter or #DavidOrtiz. While this is a victory for Jeter and the Yankees over Ortiz and the Red Sox, fear not, as Ortiz will likely make Jeter look silly when the competition actually matters in the standings. Congratulations to Jeter, Red Sox Nation hopes you lose in the next round.