This is the fifth installment of a six-part series focusing on the 2014 Red Sox Pitching and Offense. 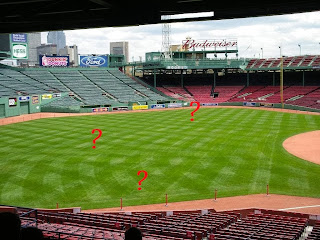 Opening Day at Fenway Park will be one of pomp and circumstance as the Boston Red Sox will receive their World Series rings and raise the 2013 championship banner. However, one vital member of the championship season won't be there patrolling center field in 2014- Jacoby Ellsbury.

But, the question remains: What will the loss of Jacoby Ellsbury mean to the team?

2014 Departures
CF Jacoby Ellsbury: Ellsbury turned his back on Boston and bolted for the Bronx (and 7-years, $153 million). While the pink hats will miss their matinee idol, the BoSox will miss the production - Ellsbury's slash line was .298/.355./.426 with 31 doubles, eight triples, nine home runs, 92 runs and 52 steals in 636 plate appearances. That's a lot of production to make up.


2014 Arrivals
Grady Sizemore: Before injuries cut him down, Sizemore was one of the premiere players in the game. Sizemore was a three-time All-Star, two-time Gold Glove winner and in 2008 - his last full season in the majors - hit 33 home runs, 90 RBI and swiped 38 bags.


Rookies to Watch
Jackie Bradley Jr: While we are all familiar with JBJ, he's still technically a rookie after getting less than 100 at-bats last season. Despite struggling with the big club, hitting just .189 in 37 games, the center field job is his for the taking.

Bryce Brentz: Brentz is likely a year away, but could make his presence felt in 2014. In 82 games at Triple-A Pawtucket last season, the 25-year-old Brentz hit .264 with 17 home runs before a knee injury ended his year in July.

Nava and Gomes will likely platoon left field again this season. Nava had a breakout season after fighting his way to the big leagues and may be one of the most underrated players not only on the Sox, but in the league. Nava finished eighth in the AL in average (.303) and fifth in on-base percentage (.385). His .385 OBP was the second-best mark among AL outfielders — behind only Mike Trout. His .831 OPS ranked third among AL outfielders — behind Trout and Jose Bautista. How's that for company?

Gomes' average doesn't tell the true story of his value. He thrives against lefty pitching, batted .346 (28-for-81) with runners in scoring position, hit four pinch-hit homers and has a nose for the clutch situations. It will be interesting to see how Farrell handles left field. Will it be a true platoon or something more along the lines of what happened in the World Series when Gomes supplanted Nava? It's clear Gomes wants more playing time.

The pressure is on JBJ this year as he replaces a fan favorite and former MVP candidate. The job is Bradley's to lose. There is no doubt the glove his on par with Ellsbury and Bradley actually has a better arm. However, the bat is another matter as proved by what happened last season. After a tremendous spring training in 2013, the performance did not translate when the games counted and Bradley was shipped back to Pawtucket. If Bradley falls on his face again, newcomer and former All-Star Grady Sizemore could be the answer.

The Flyin’ Hawaiian was a welcome addition to the Boston Red Sox championship run in 2013 hitting a career best .294 and winning his fourth Gold Glove. The big question is whether or not he can he keep out of the way of outfield walls and stay on the field. Victorino missed 40 games last year with various self inflicted injuries that saw him abandon switch hitting late in August. If Bradley and Sizemore can't handle center, Victorino could slide over to the position he played for five years in Philadelphia.


State of the Sox: Starting rotation, the bullpen, closing time, the infield.