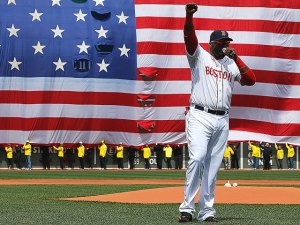 We all remember Patriots Day 2013. Jubilation of a Red Sox walk-off win to gloom of an unthinkable terrorist attack.

The heart and soul of Boston was punctured, but not destroyed. And the Red Sox were there to provide comfort and strength in a time of weakness and despair.

A year later and Boston will remember the lives lost, the victims still living with pain and the heartache of taking one of our very own prideful moments and turning it into a dark memory.

Once again, the Red Sox will be there.

The Red Sox announced plans to honor the victims of the Boston Marathon bombings and pay tribute to the heroes who courageously put their lives on the line to save others. The ceremony will take place Sunday, April 20, prior to the Red Sox game against the Baltimore Orioles on ESPN's Sunday Night Baseball (7 p.m.). According to the Sox schedule on the team's official website:

Before the game, the team will pay tribute to events of April 15, 2013, and the city's inspiring response.


The next day - Patriots Day and the running of the Marathon - the team will wear its home white jerseys with "Boston" across the chest, instead of the familiar "Red Sox." That game begins at the traditional 11:05 a.m. start time. The jerseys were last worn April 20, 2013, the first Red Sox game at Fenway following the bombings. The team website reads:

Players will wear jerseys with the word "Boston" on the front, in tribute to the strength of the city.