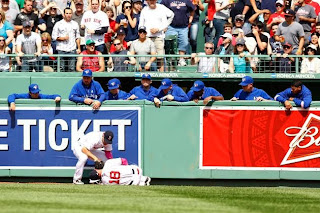 In a series of extremely unfortunate events, Boston Red Sox right fielder Shane Victorino is headed to the 15 Day DL. Victorino has been nursing a hurt hamstring for the last few days and his status to play today was kept unclear until just recently when he was officially put on the DL. This move adds one roster space for the Red Sox, allowing the team to call up Jackie Bradley Jr. Bradley will not be starting the game today but it is likely that he will be in the lineup tomorrow. Victorino's official injury is listed as a right hamstring strain and will be missing the next 15 days, surely a disappointment for him and the team. It is expected that with Sizemore in center field that Jackie Bradley Jr. will take Victornio's spot in right field. Bradley will not have to fly to Baltimore to meet the team as he traveled there with them already as a precautionary measure.