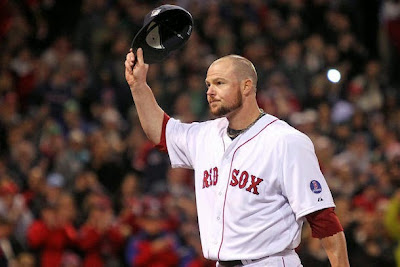 Its safe to assume that Red Sox Nation wants to see #31 play his entire career with the Boston Red Sox, and they may get just that. Jon Lester, who is entering a contract year has been looking to sign a long term deal with the Red Sox, but they have yet to come to an agreement. With the season rapidly approaching, Lester pitching in Baltimore on Opening Day, just 4 days away we may be getting news shortly of Lester signing an extension with the club. Lester, who is 30 years old and coming off a fantastic year as the ace of the Red Sox pitching staff has been talking about signing an extension with the Red Sox and even taking a "hometown discount". Lester was an integral part in winning the 2007 and 2013 championships, and last season went 15-8 in the regular season before going 4-1 with a 1.56 ERA in the postseason.

Just a few days ago the Detroit Tigers offered one of their star pitchers, Max Scherzer a contract extension that he turned down. The extension was for 6 years and $144 million. Scherzer does not have the career numbers that Lester has (100 wins), but he did just win the AL Cy Young award while posting a 21-3 record. Lester chimed in on the offer that Scherzer turned down saying "It would be tough. Let’s put it that way. It would be tough." when asked if he would have accepted the offer.

One of the biggest differences when it comes to contracts between Scherzer and Lester is their agents. Scherzer is represented by who other than Scott Boras where as Lester is represented by the Levinson brothers. Boras is notorious for making sure his athletes are some of the highest paid in the buisness, where as the Levinson brothers, who represent Dustin Pedroia, focus more on staying with one team and making sure both sides are happy. Its safe to assume that Lester will not be getting a 6 year, $144 million offer from the Red Sox, but it sounds like somewhere in that ballpark, possibly slightly lower will be enough to lock up Lester long term.