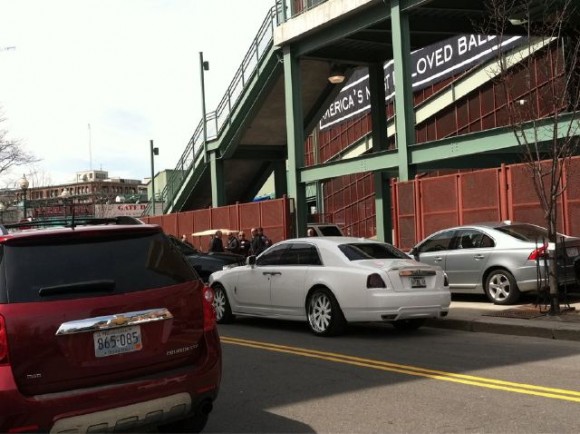 It has been a long standing tradition that you see nowhere else in Major League Baseball.

Boston Red Sox players use a section of Van Ness Street to park before going to work. It is fenced off and they are watched over by security staff as the fans can walk to within feet of players like Big Papi's cars.

It should be part of your tour of Fenway when you attend a game, as it is fun to see what the players are eating and drinking on the way in to work. I have personally seen coffee cups, wrappers, and CD covers from all kinds of interesting places lying around the floors of trucks, cruisers, and sports cars.

It gives you a look at the person, at what our heros are like.

This parking has been claimed by the Red Sox to be part of the original deal with the city dating back to 1940.

There seems to be no property records on file with the city to support this claim.

So Mayor Walsh has taken it upon himself to dig into this and see if the city can't squeeze a few more dollars out of towing away the players vehicles while they are inside playing games.

“We are currently reviewing the agreement, and compensation is one of the issues that we will consider during this review,” said Kate Norton, a Walsh spokeswoman.

In a statement, the Red Sox argued that reserving Van Ness Street for parking and foot traffic aids public safety, a position former Mayor Menino backed in the past.

Maybe we will have to have a call for action, where fans block tow truck access to Van Ness Street and hold big tailgate protests to prevent players cars from becoming political toys for Mayor Walsh?

Should the players have to park in the various garages around the area just like fans and walk to work like the rest of us?