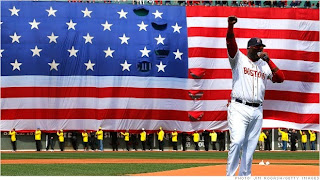 According to Gordon Edes of ESPNBoston.com, the Red Sox have reached an agreement with David Ortiz that will keep the slugger in our f'in city through at least 2015.

The contract is a one-year extension worth $16 million. The deal will be announced by the team on Monday. Sources also indicate there are vesting options for 2016 and '17.

Ortiz certainly made it known throughout spring training that he was looking for an extension.