Uehara picking up where he left off 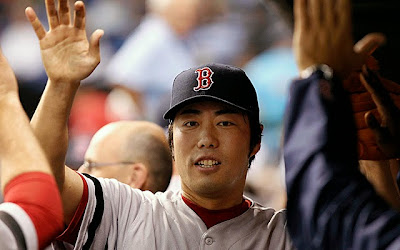 Early in Spring Training, Manager John Farrell stated that closer Koji Uehara would not be pitching much this spring, to help him recover from a short offseason due to the championship that Uehara helped the Red Sox win last season. This approach is looking like Farrell is a genius. Uehara has appeared in 4 games this spring, most recently, yesterdays against the St. Louis Cardinals. In each outing Uehara has looked better than his last, against the Cardinals he threw an inning so quickly the fans that got up to grab a hot dog at Jet Blue Park missed him throw. He threw only 9 pitches, retiring 3 consecutive batters, 8 of them for strikes including a strikeout. In 4 appearances Uehara has thrown 4 innings, allowing no hits, 1 walk and striking out 3 batters. Koji seems to have not skipped a beat and is prepared to continue his success in the closer role for the Red Sox this season.

Have you been able to see Koji pitch yet this spring training, or were you unfortunate enough to glance quickly away from the television and miss him throw an inning. With Uehara appearing to be in good form already, possibly better form than last year, how many saves do you think he will get this season? Leave your answer in the comments below or tweet me here.