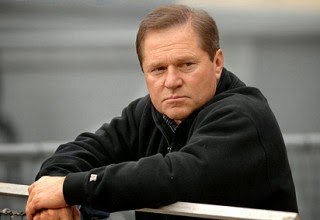 It was a matter of time before Scott Boras would start blaming someone for the lack of interest in his client Stephen Drew.

It couldn't be his fault, right?

Last week ESPN Buster Olney put out an extensive piece we referenced where five executives and a few talent scouts around the league were used to anonymously put their price estimates on Stephen Drew.

The prices were $6 million to maximum $8 million per year, while Scott Boras is preaching to the deaf choir about multi-year deals at $10 million or more a year.

I can't be true that his client is only valued at a fraction of the numbers he wants?

Scott Boras said he intends to pursue a grievance, going so far as to urge the league to use subpoena power to unearth their identities.

It is the fault of these executives who comment on what they think the value of a player is?

Obviously the market levels the playing field and the true market value of a player will come out, but he is not happy when someone makes it hard for him to explain to his clients why he costs so much.

What has he done for Stephen Drew so far this offseason besides a few press statements that he is a top-tier player and worth a ton of money? Not much it seems so now he will start making noise, waving his hands, and filing legal paperwork to make sure his client thinks he is working hard for his future contract.

"Kendrys Morales (his other unsigned client) and Stephen Drew were damaged by these comments," insists Scott Boras.

Looks like they have been 'damaged' since they turned down their respective qualifying offers of $14.1 million.

Boras further says there needs to be a "remedy" for the two free agents, which could mean monetary damages or possibly relief from a two-year-old rule (draft pick compensation for turning down qualifying offers) that cost them in the market place.

MLB COO Rob Manfred, told of Boras' new remarks, disagrees that the story hurt the Morales and Drew markets. "It is ludicrous, absurd, that one [Internet] report somehow alters the market for players who have been out there for months."

The MLB statement, issued by Manfred, read: "Over the years, I have learned that it is a waste of time to pay attention to anonymous quotes which may or may not be genuine. Given that the regular season is well under way, it is hard to imagine that anonymous comments would have any effect whatsoever on the market for any individual player. There are many other factors that better explain the current situation faced by a very small number of free agents."

Boras, who has a history of historic player contracts, suggested there was no serious hand to play after the players declined the $14.1 million qualifying offers.

Well, that leaves just a play using the legal channels and he appears to be hitting this with gusto.