Carp a regular in the bullpen? Not so fast. 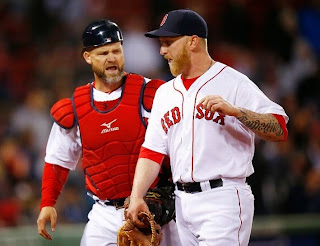 For the first time since Darnell McDonald took the mound for the Red Sox, a position player got to pitch at Fenway Park for the home team. McDonald, took the mound in 2012 in what was a blowout , where Mike Carp also got to take the mound in a blowout. Carp got the ball for the 9th inning in a 13-5 game against the Yankees. He allowed 1 run on no hits and walked 5 batters. He threw 38 pitches, 15 of them for strikes, and even had the defense turn a double play behind him, something Red Sox starter Jake Peavy hasn't been able to do yet this year. Carp may have surprised everyone, including himself by throwing knuckleballs as well as fastballs. After the game Carp stated "It was fun, It was a rough ballgame. But like I said, just to get out there and kind of have your little kid's dream, to pitch at the big league level, especially as a hitter."

Its nice to know that Carp had fun out there last night, at least someone did for the Red Sox. It seems as if the Sox get blown out again, just like last night they may have someone to go to in the bullpen again. What do you think about the Yankees series, about Carp pitching last night? Leave your answer in the comments below or let me know on twitter.