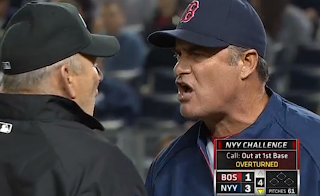 Early this season the newly implemented MLB replay system has its flaws, and after what many think have been a few blown calls Red Sox manager John Farrell's anger has finally boiled over. After the weekends 4 game series against the Yankees, Farrell commented "Its hard to have faith in the system, to be honest with you". Farrell has a point, he has challenged many calls that to the watchers eye on TV it appears that the call should be overturned yet MLB does not have the same replays the viewer has. Farrell was ejected for arguing a call after replay was used, which is an immediate ejection. Farrell is the first manager this season that was ejected for arguing a call after the umpires reviewed the play.

Before Wednesdays game in Chicago, manager John Farrell told media members that he was fined by the commissioners office because of his critical comments towards the MLB's replay system. Farrell said that the fine was in excess of $1,000 where a major league source said the fine was $2,500.

While Farrell and many Red Sox fans seem upset about the recent determinations on plays after using the replay system I think that all involved with the MLB including fans want the same thing, to get the call right. Replay is both slowing the game down and getting plays wrong, and if this continues it will need to be examined and determined if the replay system is worth it. Do you like replay? What if they got all the plays right, would you like it then? Leave your answers in the comments section or tweet me @RyanMacLeod15.