How to welcome Ryan Braun to Fenway Park 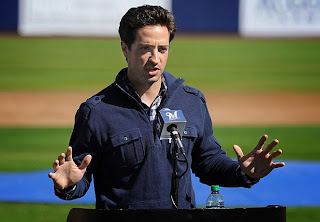 Ryan Braun made his season debut at Miller Park in Milwaukee and got a hero's welcome, after serving his suspension from Major League Baseball for a positive performance enhancing drug test. Braun, who had this test come back positive two seasons ago fought the ruling and was the first ever player to get a PED suspension overturned. After an ongoing investigation Braun was found guilty and served a 65 game ban from baseball.

Braun looked nervous as he stepped into the batters box in Miller Park but was quickly put at ease by the standing ovation given to him by 45,000+ faithful Brewers fans. Braun should not expect this same reaction when he goes on the road. He will be introduced on Friday at Fenway Park and as a fan in attendance I will be showering Mr. Braun with boos. This is an athlete that not only cheated but then lied about it. Braun now enters a list of players including Barry Bonds, Alex Rodriguez and Nelson Cruz. These players cheated and lied about it, they should expect to be booed whenever they step to the plate when they are not playing in their home stadium.

What will you do when you see Braun step to the plate? Will you boo him or will you say nothing. Boston is a tough town and I expect to hear an extremely loud crowd ever time Braun steps to the plate. Leave your answer to what you would do when Braun comes to hit in Fenway in the comments section below. If you like what you read send me a tweet at @RyanMacLeod15, and if you like what you see there give me a follow.