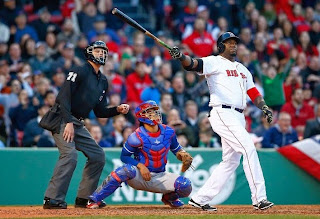 Wednesday afternoon, David Ortiz reminded all of Major League Baseball that when it comes to being clutch, he is still the man. With the Boston Red Sox down 2-1 in the bottom of the eight inning, Ortiz hit a 3 run home run, to give the Sox a 4-2 lead, and allowed closer Koji Uehara to come in and get the save. Ortiz, who's legacy continues to grow, earned his reputation with late game heroics (2004 postseason vs. Yankees, 2013 postseason vs. Tigers, etc.) and looks to continue to add late game important at bats to his long list of accomplishments. Ortiz gave the Red Sox offense a jolt of confidence with his 3 run home run, which was desperately needed, after the team continues to struggle at the plate early in the season. The home run hopefully wakes up the bats that have been quiet for a lot of the players early on.

Ortiz, who is known to be clutch, also is known for being slow, and yesterday posted the slowest time to round the bases this season after hitting a home run. Thanks to the great numbers guys at Tater Tot Tracker they clocked Ortiz at 32.91 seconds from contact with the ball and foot touching home plate. This time edges out the other home run that Ortiz has hit this season, on April 2nd, which took Ortiz 29.64 seconds to touch all the bases. Not only was this the slowest time this season, but it appears that this is the slowest time it has taken anyone to ever round the bases after hitting a home run, beating the previous record of 31.56 seconds held by Bobby Abreu. It is often known that Ortiz takes his time to round the bases, being the first player to pass the 30 second mark in 2010 and holding 7 of the 10 slowest times in the 2013 season.

Will the Ortiz home run jump start the Red Sox offense? How will the team fare going into an important 4 game series against the Yankees in New York this weekend? Do you mind that Ortiz takes his time rounding the bases? Leave your answers in the comments section or let me know on twitter @RyanMacLeod15.