Sox Fans to be given World Series commemorative rings 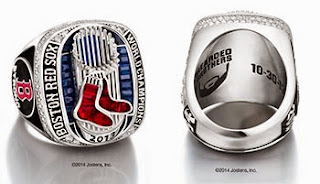 On May 20th the Boston Red Sox will be honoring the 2013 World Series Champions once again, but this time it will not be the players that receive gifts, but instead will be one of the most driving factors to the teams success last year, the fans. Every fan in attendance will be given a commemorative replica ring that is similar to the rings that the team got on Opening Day. The rings have been sponsored by Samsung Galaxy and will be modeled after the players rings. An image of the rings has not yet been leaked but it can be assured that Fenway Park will be at full capacity for this game. Tickets can be found as low as $22 by clicking here.

Make sure you get your piece of Red Sox history by heading to the park on May 20th, it may be your only chance to get a Red Sox World Series Champions ring. Will you be heading down to the park? Let me know by leaving a comment down below or tweeting at me @RyanMacLeod15.