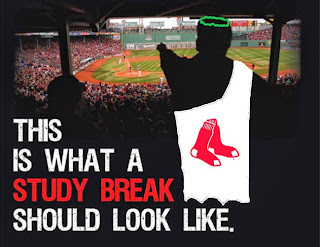 The Boston Red Sox have released that they will be selling $9 standing room tickets to every home game for high school and college students for the 2014 season. In addition to this the team has scheduled 6 special nights to target college students during the first 2 months of the season. The first night is April 8th and is Toga Night. The Red Sox have 170 tickets available for the Cumberland Farms Terrace Deck. Students will win prizes for their togas, and other baseball related knowledge. The second night is April 20th, the night before Patriots day where there is a Student Scavenger Hunt scheduled.

April 29th is the Night of Champions where students will be in the Champions Club during pre-game to take pictures with the World Series Trophies, memorabilia, and attempt to earn ticket upgrades. There are 300 tickets for sale for this night, on a first come first serve basis. May 1st is Greek Night, where the Red Sox want you to come out in your fraternity and sorority gear with your fraternity brothers and sorority sisters. They will have similar pre-game festivities as champions night. College Media night is May 18th and is geared towards journalism and communication students. Here the students will be shown the day to day operations of the front office media personnel from the Red Sox, including a panel of guests that has not yet been announced. The final college themed night is Class of 2014 Night, on May 29th. All recent college graduates are invited to the game and celebrate the great accomplishment they just achieved with other graduates form the Boston area. If you want to read more about the events and keep up to date click here.

As a college student, I know that I will be taking advantage of this great deal, and will likely be at some of the special college themed nights put on by the Red Sox. If your a college student will you be there as well, at what game or event? Leave your answers in the comments section or let me know on twitter.