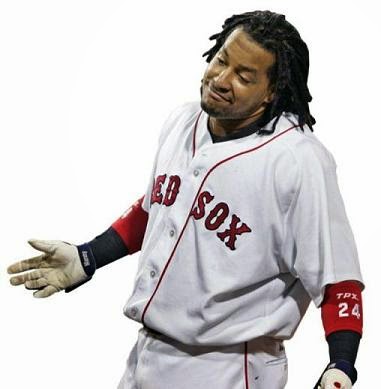 It has become kind of a sad story.

Years of major league baseball, then busted for PED usage.

Back to baseball and again busted for PED usage only to fade away.

He attempts a comeback overseas and ends up embarrassing himself more than anything else.

It was quiet for awhile but the comeback story has reared its head again.

Manny Ramirez is a free agent, awaiting a deal, and training hard to get fit for Major League baseball.

His potential comeback is discussed by clnsradio.com and seems to lead to the thought that he would be an effective DH for some team out there.

While his career totals are pretty impressive with 555 homers, 1831 RBI's, and a lifetime .312 AVG over 19 seasons, who would take a chance on him?

He is famous for bad attitude, lazy performances, low tolerance for the rules, bad judgement, and more importantly a long span of not playing at the major league level.

It is very doubtful after having been given chances in the minor leagues with Oakland in 2012 and Texas in 2013 that he would convince anyone that he has enough value to play DH at the top level.

His last real shot was in 2011 with Tampa Bay, 17 plate appearances with just a single hit.

Game over Manny Ramirez, time to fade away gracefully?