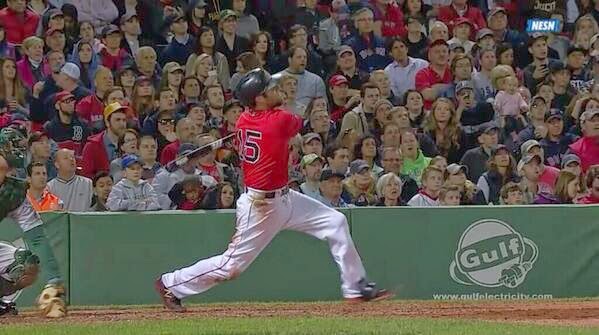 Dustin Pedroia's 6th inning grand slam - the 100th home run of his career - powered the Red Sox to a 7-1 win over the Oakland Athletics at Fenway Park Friday night. Clay Buchholz was the beneficiary, picking up his 2nd straight win.

Buchholz went 6.1 innings allowing just 1 run on 3 hits and 3 walks while striking out 5. The loss went to Dan Straily.

Boston scored first with 2 runs in the bottom of the 2nd inning. A.J. Pierzynski drove Grady Sizemore in with an RBI single and he came around to score on Jackie Bradley Jr.'s double one out later.

Oakland's lone run came in the top of the 3rd inning on what was ruled a wild pitch by Buchholz that allowed John Jaso to score.

Xander Bogaerts and Pierzynski singled to start the Boston half of the 6th inning. One out later Bradley Jr. walked to load the bases for Pedroia who hit Ryan Cook's offering into the Monster seats.

Mike Napoli finished the Boston scoring with an RBI single in the bottom of the 8th.

The Red Sox totalled 11 hits; Pedroia, Bogaerts and Pierzynski each had 2.