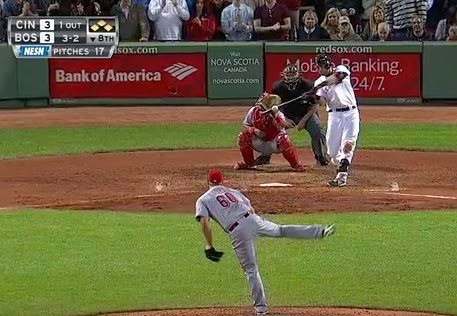 Will Middlebrooks' bases-loaded single in the bottom of the 8th inning scored Jonny Gomes with what proved to be the winning run as the Red Sox came from behind twice to beat the Cincinnati Reds 4-3 at Fenway Park.

The win gave the Red Sox a sweep of the 2-game series - their first sweep of any series this year - and FINALLY got the team to the elusive .500 mark.

The Reds took a 2-0 lead in the top of the 3rd inning on a 2-run home run by Skip Schumaker off Red Sox starting pitcher Jake Peavy. Boston tied the game in the bottom of the 6th on an RBI single by David Ortiz and a run-scoring double by Mike Napoli.

The Reds scored a run in the top of the 7th on a bases-loaded ground out, setting the stage for Boston's 8th-inning comeback.

Craig Breslow got the win in relief for the 2nd night in a row; Koji Uehara struck out the side in the 9th for his 8th save of the season.

Jake Peavy allowed 3 runs on 4 hits and 4 walks over 6 innings while striking out 4.