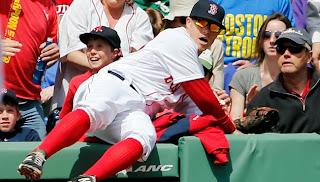 Brock Holt joined the Red Sox in the 2013 off season in a trade with the Pittsburgh Pirates that included Joel Hanrahan. He was a minor league prospect for the Pirates who had made an appearance at the end of the 2012 season, playing in 24 games, hitting .292. After being traded to the Red Sox he has played in AAA for the majority of 2013 but made appearances in 26 games for the Red Sox. He started this year in AAA as well, playing in 27 games before he was called up to the Majors due to the injury bug that hit the Red Sox.

Since joining the Red Sox he has been a spark plug that has benefited the Red Sox both offensively and defensively. He has played third base in the absence of Will Middlebrooks and has made numerous plays at third that it can be hard to assume that Middlebrooks would make. He has hit .305 in 21 games and hit his first home run in the Majors last night against the Tampa Bay Rays.

Holt is proving how valuable he is and is making a case that he should stay on the 25 man roster when many players come off the DL. Today he is playing first base, a place held by Napoli, who is currently on the DL. With the acquisition of Stephen Drew and his imminent return to the 25 man roster, the fate of Holt is coming into question. Drew is returning to play shortstop, and will likely split time there with Xander Bogaerts, while Bogaerts will also be playing third. This pushes both Middlebrooks and Holt out of the spotlight. Holt continues to prove his value, playing different positions, being a utility infielder as well has having the ability to play the outfield if needed, something he has yet to do this year with the Red Sox.

Holt should not be someone that the Red Sox consider trade bait, especially with what he has proven this season. If someone needs to be traded out of the infield, it should be Middlebrooks. What do you think of Holt, what will happen with his debut at first base today? Leave your answers in the comments below or let me know on twitter.