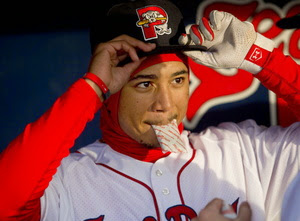 Red Sox prospect Mookie Betts has had a white hot start to the 2014 season, in fact he has been so good for AA Portland that he was promoted to AAA Pawtucket. Betts, primarily a second baseman has started to transition to becoming an outfielder to become a more versatile and enticing player for the Red Sox. Betts started to get his recognition when he was in the middle of his 66 game on base streak, a streak that extends back to last season. Betts is considered the Red Sox #1 prospect by some online websites, but the official Red Sox website lists him as the #5 prospect in the organization.

Betts, playing in 54 games this season in Portland hit .355 and at one point had an average over .420. In his 214 at bats Betts hit 6 home runs and drove in 34 RBI's. His OBP is an outstanding .994, which has caught the eyes of big league management. GM Ben Cherington went on record to say this about Betts, "I think at some point we have an obligation to challenge our young players when they are performing at a level where it's not certain that they are being challenged. It's up to us to make sure that they're being challenged."

Betts has an extremely bright future it his past has any say. The only issue with him joining the Red Sox is the fact that he is a second baseman, a position that the Red Sox have under contract through the 2021 season with Dustin Pedroia. The outfield is also deep with the Red Sox, and they have players that could be with the club down in the minor leagues. It seems unlikely that Betts will make it up to play in Fenway Park this season, but we never know. If this youngster puts up numbers in AAA like he did in AA it surely would be impossible to not make him a September call up.

Will Mookie play for the Red Sox this season? Leave your answers in the comments below or let me know on twitter by clicking here.