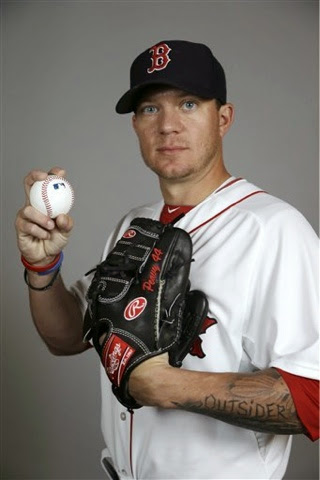 Toronto,ON- It's official; the Boston Red Sox are the hottest team in baseball right now. Winners of 8 of their last 9, and setting season high marks in runs scored, hits and homeruns in a game, Boston is starting to fire at all cylinders. Tonight, Boston faces Toronto in the second game of the series. Jake Peavy faces The lefty J.A. Happ. Happ has struggled of late, and with an ERA of almost 5, he will need to work the corners of the plate and keep Boston hitters off balance.

Quick, how many wins does Jake Peavy have this year? If you said one, you'd be correct. The 1-8 starter has a 4.59 ERA and has really had an unlucky season, getting almost no run support from his teammates. His 2.91 runs of support per game rank him last in the American League. While recording quality starts in 5 of his last 6 starts, he has yet to win any of them.
That information is not deterring the St. Louis Cardinals from trade rumors, as they are still very interested in aquiring Peavy by the trade deadline.